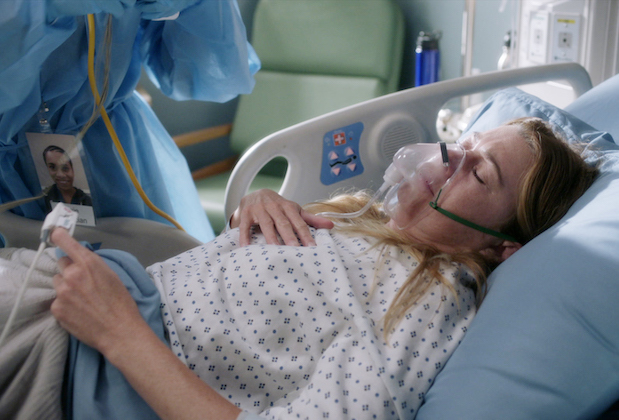 What a season so far. They are pulling us in so many different directions we can hardly keep up! Is this the last we’ll be seeing of Meredith Grey?

The midseason finale left us on a serious cliffhanger. First of all, the Deluca’s! What is going to happen as they follow that horrible woman? I can’t even believe she came back into the hospital after they knew what / who she was last time she was there.

Meredith though?! What on earth is going to happen next? We left off with her crashing and being hooked up to a ventilator. Grey’s fans are calling this situation all too familiar. What does it remind us of? Our beloved Mark Sloan. Is Meredith experiencing the surge? Will this be the last we see of her?

Now, before you go saying “It’s Grey’s Anatomy there is no way she can die then there won’t be a show!” We get it, we know this. That’s not concrete though. I know Shonda had said she will end the show when Meredith decides not to extend her contract any further, but Krista is doing the writing now. Who knows what they’ll actually decide to do. There have been plenty of shows that have thrived without their main character. Grey’s Anatomy has done a phenomenal job building so many different storylines. It’s possible!

This season was far too short though. We have to wait until March to see what happens next! Will Meredith survive? Will Tom survive? Who will be next to get it? They keep mentioning Catherine Avery not wearing her mask properly and being stubborn so I wonder if she will be on the list. That would be tragic though, she has a weakened immune system so they could easily kill her off. I can’t stand to see Richard go through that again!

What will become of Owen and Teddy? She has now betrayed his trust more than ever before. First she cheats on him and then she admits their daughter is named after a secret romance that broke the trust of three best friends. Teddy is getting rather spicy this season.

There are so many possibilities of what will happen next. Only 3 more months until we find out! Our biggest question here is, will Meredith Grey survive this? Let us know your theories and what you think will happen next! Do you think the series is coming to an end?