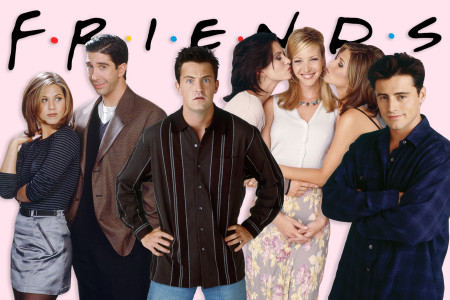 ‘Friends’ was one of the greatest shows ever in my personal opinion. I have watched it countless times and it is what I put on in the background while I sleep. It’s witty and hilarious, as well as wholesome. Do you ever wonder what the cast is up to these days? Don’t worry, we have you covered.

Jennifer Aniston, who played Rachel, is now fifty years old (even though she doesn’t look like she ever ages). She is probably the most famous of all the other castmembers as we have seen her in many movies and shows since ‘Friends’. It looks like her latest appearances were in the movie Murder Mystery and on The Morning Show. She also is starting pre-production for a movie called The Fixer. It was announced that she will be doing a project with Sophie Goodhart as well. It looks like we can expect to see a lot more from her as time goes on! She even posted this photo on Instagram with the caption: “Hi from the girls across the hall”

Courtney Cox, who played Monica Geller, is now fifty-five years old. She has also appeared in various roles since ‘Friends’ ended. Most recently, she played herself in Modern Family. She also starred in an episode of Shameless back in 2018. We know from the photo posted above that she has reunited with some of her fellow ‘Friends’ cast members recently. Other than that, Courtney has not been up to much! She’s been keeping herself busy, doing some shows and movies here and there and just overall living her best life!

Lisa Kudrow, who played Phoebe Buffay, is now fifty-six years old. Recently she has starred in a TV series called Human Discoveries, a movie called Booksmart and another TV series called Unbreakable Kimmy Schmidt. She has three projects that are currently in pre-production. Two movies, Good People and Bright Futures (she will be narrating this one) and one TV show, Housebroken. All Phoebe fans should definitely look for all those when they come out! It looks like Kudrow, much like Cox, has just been focused on her roles as an actress and living life!

Matthew Perry, who played Chandler Bing, is now fifty years old. He was notably one of the funniest characters on the show. He hasn’t starred in anything since 2017 and there are no pending projects that we know about. We all know by now that Perry had an addiction issue back when ‘Friends’ was being filmed. He even stated to BBC Radio 2 ” I don’t remember three years of it.” when asked about filming the show. Currently, it looks like he is dating a talent manager, Molly Hurwitz, which was confirmed by US Weekly. We wish Matthew Perry all the best and hope for him to stay on the right track!

Matt Leblanc, who played Joey Tribianni, is now fifty-two years old. After ‘Friends’ ended, he starred in his own spinoff series, Joey. That lasted about two years and was cute and witty. I enjoyed it because Joey was my favorite character so it was great to see him continue to play that role in a different setting. He then was in the show, Episodes and the show Man With A Plan. As of now, it looks like Leblanc is focused on his role in Man With A Plan, which was renewed for a fourth season!

David Schwimmer, who played Ross Geller, is fifty-three years old. He starred in Will & Grace back in 2018-2019. He was also in The laundromat and an episode of Last Week Tonight with John Oliver. It also looks like he will have a main role on a show coming soon called Intelligence as an NSA agent. The first thing I saw him in since ‘Friends’ was American Crime Story, where he played Robert Kardashian.

Those are the main six characters, but how about just a few of our other favorites?

Janice Hosenstein: Janice was played by Maggie Wheeler. She is fifty-eight years old (although you’d never know it, she looks so good!) She has been making us laugh by re-creating her character for us time and time again since the show ended. She did it back on an episode of TODAY. She has been staying busy in various roles since ‘Friends’ ended, including The Addams Family, Shameless and The Epic Tales of Captain Underpants.

Gunther: James Michael Tyler played Gunther. He is fifty-seven now! He hasn’t really been doing much since 2013 when he starred in Modern Music. It looks like he will be in a short horror production called Processing which is in post-production, as well as The Gesture and The Word which is also in post-production.

There you have it, some of our favorite characters and what they are doing today. It’s exciting to see a lot of them are currently working on projects and that we can see them acting in various roles still! I don’t know about you guys but I can’t wait to see these upcoming shows/movies!