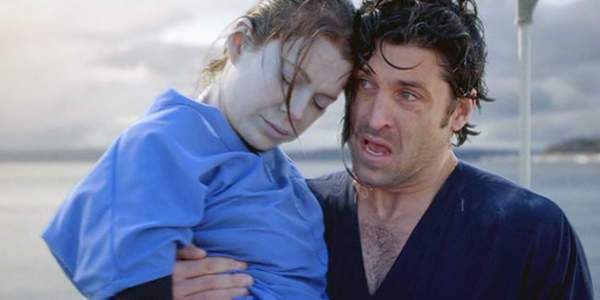 In the tenth spot we have Richard and Catherine. This couple is our least favorite ranked couple. These two seem to love each other but neither of them enough to put the other one first. Catherine is a very strong, powerful black woman and we love to see it. The issue here is that Richard wants to be just as strong and powerful which causes the two to clash. It seems like their entire relationship is a fight to be best. We love both of these characters individually, but together it’s just a no go.

Richard and Ellis come in 9th place. Similarly to Richard and Catherine, there was in fact a power struggle. We know that Richard left Ellis to go back to Adele but he admits that the underlying reason was her nomination for the Harper Avery award. They don’t land last place solely because Richard somehow brought a light out of Ellis Grey, who we all know if tough, a little bitchy and focused. It was sweet that he was able to bring out that side of her. But you know, they were both married to other people so they can’t really be one of the top ranked!

Alright in 8th place we have Mark and Lexi, but hear us out. They were SUCH a cute couple and we truly do love them, but they never seemed to be able to get on the same page (until Lexi was dying). The lack of communication between the two of them really did not help their relationship. That is why they are ranked rather low on the list. They were perfect for each other but just were not able to cross the finish line into happiness. But, hey! Maybe they’re both happily ever after in Heaven right now!

Alex and Izzie are number 7 on our list. Izzie was the first to really give Alex a chance to be a decent human being. I truly believe she was a large part in his character development. Alex did cheat on her with Olivia, which we can assume was because he was afraid to actually be a decent human being. Though, as great as it was that Izzie made Alex a better person, she also singlehandedly destroyed his character development in the end. She had his children without telling him, then pops in to say “oh hey i have your kids leave your whole family and life behind and come to me”. Like, come on. I get it, Justin Chambers left suddenly, but the storyline sunk at this point.

In 6th place we have Meredith and Andrew Deluca. They could be a really cute couple at times. In the beginning we really liked them, but as of lately we’re on edge. After Meredith’s trial, Andrew seemed upset that Meredith’s feelings for Derek were stronger than her feelings for him. Well, DUH! Derek was her soulmate, her endgame. If he hadn’t died they would still be together. You don’t just take the place of that. Meredith did love Andrew though, and if he is able to get his emotions in check, perhaps they can live in happiness together. (unless of course McWidow takes his place which we don’t mind)

In fifth place we have Alex and Jo Wilson. These two are perfect together. They started off as friends which really paved the way for a great relationship. They make each other better. They are always laughing, rarely fighting and just seem so simple. Even when things were rough and Jo was depressed, their love for each other didn’t seem to shake, it stood still. It’s very unfortunate that the storyline had to be changed because we feel like these two could have been such a light in the dark of this show.

We’re getting down to the top 4 now! Callie and Arizona take 4th place. We loved them together, and assume that Penny is out of the picture now and they’re a happy family again (wishful thinking). Up until the plane crash, they had a wonderful relationship. They had their bumps in the road of course especially when they were on different pages about having children. Their love was very strong though, that’s why we believe they are happily ever after again now.

WE LOVE BEN AND BAILEY! Like, come on. They are SO cute together and Ben is so good with Tuck. You would never guess that Ben is a step father because of the love he has for Tuck, which is exactly how it should be. Now, like any couple they have their downfalls. Ben switched up career paths quite a bit and Bailey has OCD which made it difficult for her to grasp. She did what was best for her and asked for a sabbatical. Ben made it clear he wasn’t in love with this idea but he still respected Bailey enough to let it happen and knew their marriage was stronger than this one struggle.

I know, I know, number 2?!? That’s crazy!! Sorry, but I can’t resist who is going to be number one. Anyways, Meredith and Derek take the number 2 slot. They were a beautiful love story. They started off shakey of course, but their love really was ultimately very strong. They are the love story we all know and love. He finally picked her, chose her, and loved her. With a few bumps along the way.

We absolutely ADORE these two together. Amelia deserves happiness and Link is the perfect one to give that to her. They click so well and they are going to be the greatest little family. Everything about them is amazing. We can’t think of any negative things to say about them, we just love them so much. We’re extremely excited to see where their journey brings them!

Well, thats it folks. Those are our top 10 Grey’s Anatomy couples. Are yours similar to ours? Let us know!