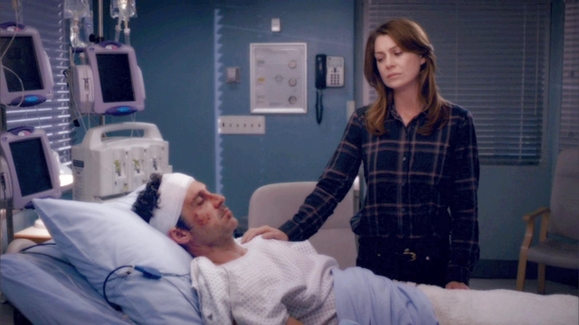 April 23, 2015. Seven years ago, many Shondaland fans had their hearts shattered when the incredible Derek Shepherd breathed his last breath.

It seems that all hope is lost. The electrocardiogram shows that long flat line. He’s gone. Meredith says her goodbye.

So you are probably wondering, “His heart is a permanent flat line. How can he possibly return to us?” Hold on just a second, and let us go back to a pivotal moment for Derek in episode 12 of season 10 of Grey’s Anatomy: Derek receives a phone call from the President of the United States.

The President offers him an opportunity to participate in the Brain-Mapping Initiative, and he takes it. His acceptance and work for the President cause a strain on his marriage with Meredith, and it hurts MerDer supporters everywhere. He’s later chosen to run the advisory board for the entire project.

At the end of season 10, Derek returns from Washington, D.C. with news of an offer to work at the National Institutes of Health along with another offer for Meredith at James Madison Hospital. Meredith, in the final episode of season 10, tells Derek that she can’t leave Seattle, where she grew up and has made a life for herself. At the beginning of season 11, Derek decides to turn down the offer in order to do right by Meredith and his children. In episode 8 of the season, Derek is again offered the job in Washington D.C. by the President, and the situation intensifies his fight with Meredith. Meredith, tired of and feeling drained by Derek’s excuses for turning down the job, tells him to take it – and he does.

Jumping forward some: MerDer eventually starts to move past this whole ordeal, and when he was on his way to the airport for one last trip to D.C, he came upon a car crash on an isolated road. He very quickly went to work, saving four people from the wreck before the ambulances and emergency officials arrived to take the patients to Dillard Medical Center. Once they left, Derek returned to his car and began to pull out and turn around when his phone rang.

Leaving the car in the middle of the road, he reached for the phone, not seeing the approaching semi, which then crashed into the side of his car. Derek was taken to Dillard where the doctors began examining him. Derek was hurried to the OR, but by the time doctors discovered what was going on and managed to bring in a neurosurgeon (whom they had to wait for over an hour after paging him), it was already too late and Derek was pronounced brain dead. The moment almost every fan broke out into an ugly cry.

So how? How does he come back? No, I’m not talking about Meredith or Owen or Amelia or any other character having some sort of new magical gift. If Patrick Dempsey wants to grace our Grey’s Anatomy screens again, characters need only look to their President. McDreamy is remarkable, and the government sees that. He has turned away from them and all the work they’ve planned for him.

However, they need him. He’s a doctor who they want to: manipulate into creating weapons? make physically torture criminals? have secretly healed a valued person without enemies knowing? The list goes on and on. The point is: the government needs him. I’m raising the idea that the government will do anything to get him: lie to his family, fake his death, and keep him hostage. When should we see him again? When he breaks free or is let go from the hold the government has over him.

It may seem crazy, but we must remember Shonda’s other show, Scandal. Assassinations, fixed elections, psychotic torturing tactics, etc. When it comes to Shonda Rhimes, never say never.