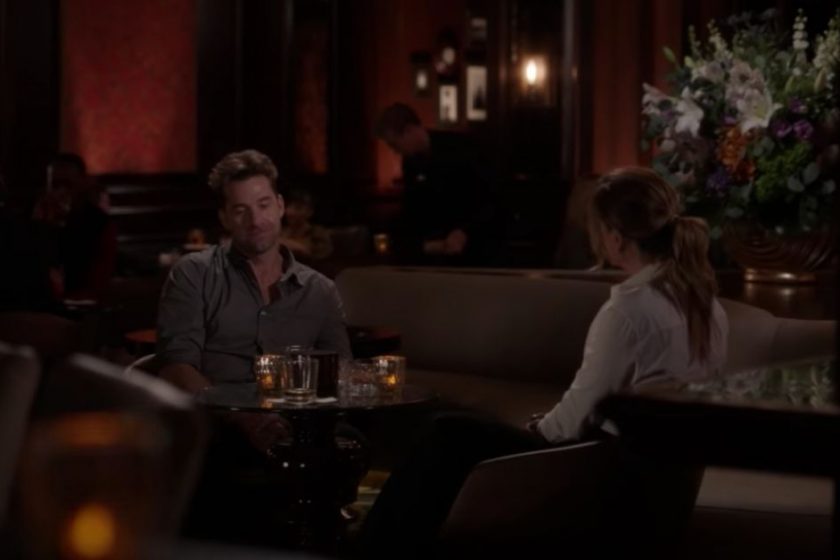 So we’ve been looking into a lot of your theories lately and this one has to be the one we’ve seen the most.

Meredith seems so happy with Nick, AKA McKidney, the kidney transplant guy from previous seasons who has now returned. What viewers are noticing though is something seems a little strange about their encounters and interactions. Almost as if he may just be a figment of her imagination.

Every time we see Meredith and Nick together, they are alone. There are never any third-party interactions with them. This is the main reason people are believing him to be all made up in her mind. They go to dinner, pass each other in the hallway or in the hotel but nobody else has ever come and spoken to the two of them.

Is something wrong with Meredith and we’re just getting a foreshadowing into it? Is she imagining her own happiness and bringing back a love interest from her past in order to do so? Now, this does seem pretty far-fetched, but it wouldn’t be the craziest thing we’ve seen on the show. So, it’s definitely not out of the realm of possibilities when it comes to Grey’s Anatomy.

What do you all think? We’ve seen quite a lot of fans with this theory which is why we wanted to touch on it. Could Mer have a tumor now? Is she starting to have early onset Alzheimers and this is how they are planning to begin wrapping up the show?

We already know, Ellen Pompeo is so ready for the show to end. She has never been one to hide that desire of hers. Just recently, at the Emmy Awards, Ellen was stopped for some questions and was asked by Nischelle Turner if they were about to premiere season 19 right now. Ellen laughed and corrected her and lets her know it is season 18. Everyone starts to joke and Kevin Frazier says there has to be a season 19. Ellen’s reaction was laughing but in a horrified manner! She was joking about praying together while they were talking about another season. Later in the conversation, Nischelle mentions the conspiracy theories saying Grey’s Anatomy is ending. Ellen responds by saying those theories are not far off and she has been trying to get away for a while.

She mentioned that if there is something creative to portray, she stays and that they have somehow kept coming up with really good ideas. She could not go any further into detail because she “made promises” to not talk about it, but she definitely let it be known that she feels done with the show and is hoping for it to end soon. Though she loves the network and she loves her cast members and that’s why she is still there right now.

So, who knows at this point! This could be them leading us up to our final goodbye! I guess we’ll have to wait and see!